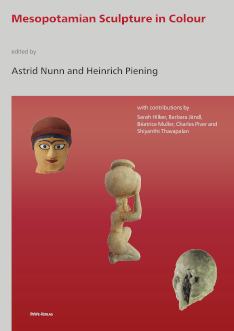 We can now be sure that Mesopotamian sculpture of the human form was typically coloured. Our project, which set out to reconstruct the polychromy of Mesopotamian stone statues dating from the fourth to the first millennium BCE, is a part of a slow shift to incorporate more visual evidence in research about colour and perception in the ancient world that has long been dominated by ethno-linguistic studies. Our scientifically grounded reconstructions serve as a prelude to a more comprehensive exploration of the materiality and aesthetics of Mesopotamian sculpture, which open many windows onto historical, cultural, and symbolic issues.
In this study, we trace the chronological development of the use of colours and consider why they changed over time. The manner in which colours served as social markers – of gender, ethnicity and class for example – are explored from the material culture and textual perspectives. When used to describe hair, skin, and garments, Sumerian and Akkadian words for colour denote more than just physical properties. They also evoke qualities such as lightness or darkness, dullness or glossiness, and encode specific symbolic values that impinge on many aspects of society. In all cultures, the notion of skin colour is subject to social concepts, prejudices, and ideals, and is thus a matter of convention. Our discovery that the face and body in particular were so vibrantly coloured provides an entirely new and unexpected view of ancient Near Eastern effigies. Through such luminous, radiant and lucid colours, we are now able to recognise the true faces of the statues, and to visualise what was considered beautiful and acceptable to the gods.