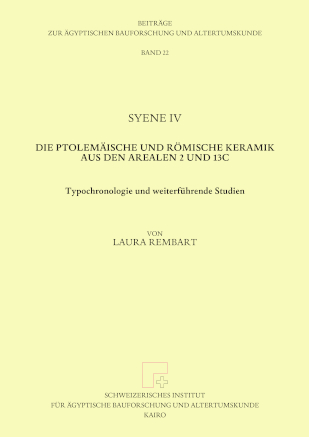 Situated on the first cataract, the Upper Egyptian city of Syene – modern Aswan – was an economic and political centre in antiquity and formed an important link between Egypt and neighbouring Nubia to the south. It functioned, together with the Nile island of Elephantine opposite, as a trading hub for the exchange of goods to and from Inner Africa, including luxury goods such as gold and ivory. Through the exploitation of new clay deposits, the region of Syene developed in the Ptolemaic period into an important production centre for ceramics, whose products were exported within Egypt and later beyond the country’s borders.
In a multi-year project of the Austrian Archaeological Institute, Head Office Vienna, in cooperation with the Swiss Institute for Egyptian Building Research and Archaeology Cairo, the focus was on research into everyday culture in Syene and Elephantine from Ptolemaic to Late Antique times on the basis of the material legacy from residential buildings. Within the framework of this project, the Ptolemaic and Roman find material from several residential complexes of Syene was analysed, among other things. These results are now presented in this volume. The main focus of this work, apart from a detailed typochronology, is on the contextual evaluation of the material as well as a comprehensive characterisation of the pottery of that period, taking into account the different makes. A special feature is the locally produced tableware, the production of which can now be dated to the early 2nd century BC. For the first time, the interrelationships between local product groups, vessel forms and manufactures as well as the differences between the Ptolemaic period and the Roman Imperial period are shown in detail. The spectrum of Syene forms is used to illustrate the adoption of foreign food and drink customs as well as innovations in the cooking process. By analysing the imported pottery, especially the sigillata and amphora fragments, it is also possible to draw conclusions about the trade relations between the seemingly remote Syene and the Mediterranean region.