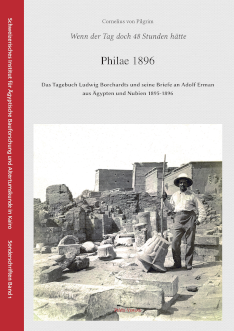 The Egyptologist Ludwig Borchardt, the most important representative of Egyptian building research of his time and founding father of two research institutes still working in Cairo today, travelled to Egypt for the first time in 1895. There he participated as a German representative in the first international rescue excavation on the temple island of Philae, which was to be flooded by the Nile after the construction of the first dam near Aswan. His diary kept on the journey and during the excavations and the letter reports, notes, sketches and photographs sent to Berlin now form an important, as yet unexplored source from the early days of modern Egyptology. They not only provide a wealth of observations and details that complement the excavation report published at the time, but also tell of Borchardt’s diverse research in the region of the First Nile Cataract and on his further journey, which took him as far as Unternubia. Against the backdrop of the competition between nations in the exploration of ancient Egypt, the reports, written with laconic wit, also provide an exciting glimpse of the country and its people, the everyday life of excavators and the history of the acquisition of museum objects.