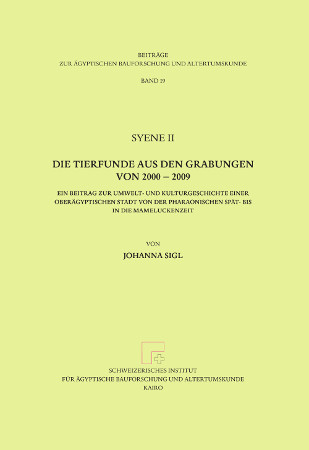 More than 2500 years ago, on the east bank of the Nile, opposite the Pharaonic town of Elephantine on the island of the same name, the town of Syene, predecessor of today’s Assuan, came into existence. The partner towns formed the gateway to Nubia and Central Africa. They lay on the route of most trade expeditions on their way to procure gold, ivory and other goods for Egypt and the whole Mediterranean. Due to their strategic importance at the south border of the country both towns must also be seen as permanent military strong-points undergoing continuous change in the composition of their inhabitants: soldiers and mercenaries as well as merchants of many nations lived there for shorter or longer periods and brought their respective cultural and religious traditions to the First Cataract. While Elephantine provides an almost complete insight into the first two and a half millennia of Egyptian history, the exploration of Syene builds a bridge via the Islamic Middle Ages to the Modern Era.
The examination of faunal remains from the excavations of the “Schweizerisches Institut für Ägyptische Bauforschung und Altertumskunde” in Kairo in cooperation with the Assuan inspectorate of the Egyptian Ministry of Antiquities allows a deep view, from the Late Period of ancient Egypt until the 15th century A.D., into the ways that the inhabitants of Syene made use of animals. So far the archaeozoological exploration of Egypt lacks a study of skeletal material of that time span as well as of domesticated and wild animals from all families: this volume closes the gap, at least for the area around the First Cataract.
The presentation of the material according to the identified species is accompanied by a detailed description of the methodological background as well as by comparisons with faunal studies all over Egypt from Pharaonic times to the Modern Age. The ideas discussed with regard to individual species are supplemented by the interpretation of the complete material as to changes in the ways of utilizing domesticated animals, as to preferences in the diet or as to knowledge of breeding. Faunal remains are also used as a possible means of information about trade routes to and from Assuan in the course of the roughly 2500 years of the town’s history. A special attempt has been made to throw light on the questions after shelter for the animals, the supply with fodder and the size of the herds of domesticated animals needed for the meat part in the diet of Syene’s inhabitants.