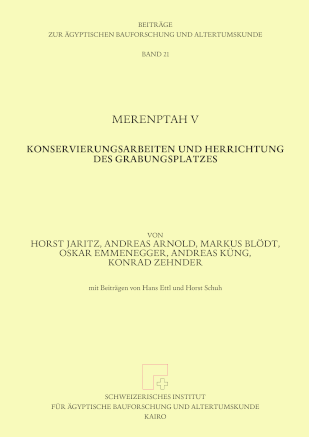 Within the framework of the follow-up investigation of the Million Year House of Merenptah at Thebes/Luxor (Egypt), which was first examined by W. M. Flinders Petrie (1896), Volume V reports in its first part on the preparation of the re-excavated ruin, including its remaining components and statues, as an open-air museum accessible to the public. Using mainly excavation debris of various kinds, the entire complex was made visible again. This includes a covered lapidarium, in which components and remains of colossal statues of secondary origin are kept, as well as the foundations of the 2nd pylon of a monumental gate of Amenophis III, consisting of polychrome limestone blocks, which have been converted into showrooms. The complex also includes the construction of an archaeological museum where fragments of the temple’s decoration and furnishings are on display.
In the second part of the volume, in addition to the recovery, restoration and conservation of the found stones and statues, the efforts and preliminary investigations undertaken by various institutions and laboratories are presented, which finally made the restoration and conservation of largely all the found components and statues possible.

With contributions by Hans Ettl and Horst Schuh.