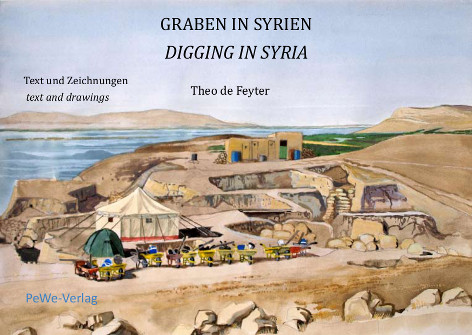 In ‘Digging in Syrien’ Theo de Feyter presents drawings, paintings and texts called forth by his observations of workers and scientists at one of the last excavations before the outbreak of the uprisings in Syria. The impressive landscape of the Euphrates reservoir forms the decorative scenery for the work of archaeologists, students and local workmen, who are exposing a Late Bronze Age town in this distant corner of the country. Archaeological field-work is a slow, laborious process carried out under difficult circumstances: De Feyter’s drawings, paintings and texts document it carefully in all its aspects.
Here is a rare view into the archaeological practice of a typical excavation in the Middle East, a practice that had to be abandoned for the time being and that, if ever taken up again, will probably never look like what de Feyter has captured. This book is already a historical document.

Theo de Feyter (born in the Netherlands, 1947) is both, an artist and an archaeologist. As archaeologist (University of Amsterdam) he has worked in Syria and in Turkey, as artist he has worked wherever his travels took him. He prefers a documentary way of drawing and has published several books of drawings and texts, e.g. ‘Mensen en ruïnes’, about a visit in Homs and Aleppo in March 2017, or ‘Syrië, een geschiedenis in ontmoetingen en plaatsen’, a book about the history and culture of Syria (both publications in Dutch).