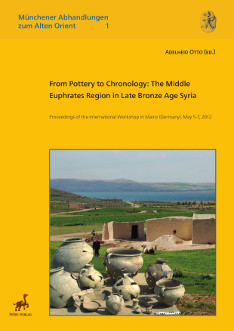 Adelheid Otto (ed.)
From Pottery to Chronology: The Middle Euphrates Region in Late Bronze Age Syria.
Proceedings of the International Workshop in Mainz (Germany), May 5-7, 2012.

This volume presents the result of an International Workshop on the Chronology of the Late Bronze Age (15th-13th Century BC) in Northern Syria, precisely of the Upper Syrian Euphrates Area with the sites Emar, Tall al-Qitar, Tall Munbaqa, Umm el-Marra and Tall Bazi. The relative and absolute chronology of each of the mentioned sites was analyzed with the help of stratified pottery and associated material as well as radiocarbon dates. New chronological anchor points for the Upper Euphrates valley were achieved, replacing the hitherto mainly used chronological fixpoint of the ‘Tablet Building’ at Hadidi. As a result, a new synchronized chronology for the LB IA, LB IB and LB II periods in Syria is proposed. On a historical level, the destruction of most of the sites can be attributed to the Hittite expansion in the mid 14th century; only Emar, el-Qitar and Karkemish were spared and flourished.