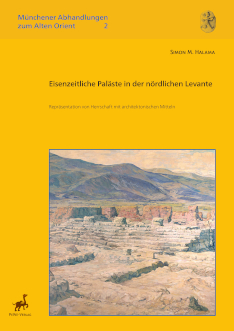 The Iron Age in the Levant was marked, on the one hand, by the local Syro-Hittite states and, on the other hand, by the empires of the Assyrians, Babylonians and Persians. The architecture created in the Syro-Hittite states impresses strongly by its monumentality and, above all, by the sculptured orthostats decorating buildings at sites such as Zincirli Höyük, Sakçagözü, Karkamiš, Ḥamāh and Tall Taʿyīnāt. The foreign powers to whom the region became subject – especially the Assyrians – installed their governors in palaces that were visible symbols of their sovereignty, for example in Til Barsip, Zincirli Höyük and Tall Taʿyīnāt.
Besides many studies concerned with sculpture, urban planning and other aspects of the Iron Age in the northern Levant, here is now the first comprehensive and comparative monograph addressing the palaces of the period. The author examines the architecture as well as the decoration with bas-reliefs and murals of Syro-Hittite, Assyrian and Persian palaces. Against the background of sociological theories of power and sovereignty he analyses the way in which architecture and sculpture were employed in the cause of representing and legitimatising the respective ruler, and he reconstructs the underlying strategies of representation. It becomes clear that locally entrenched as well as foreign rulers differ in the manner in which they present themselves, through their palaces, towards, on the one hand, the common people and, on the other hand, the members of the elite. But while, in spite of the large number of political entities, the Syro-Hittite rulers share similar ideas about architecture and iconography, the architecture of the Assyrian palaces in the provinces surprises by its heterogeneousness, sometimes widely deviating from the concepts established in the homeland.
The combination of architectural and pictorial analysis arrives at new insights into the cultures of the Syro-Hittite states as well as into the Assyrian rule in the Levant.