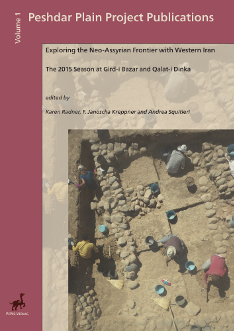 The Peshdar district is part of the province of Sulaymaniyah in the Kurdish Autonomous Region of Iraq. In its centre lies the Peshdar Plain, surrounded by the glorious mountainscape of the Zagros and bounded in the south by the valley of the Lesser Zab, which connects the region to the Assyrian heartland and Western Iran. The international and interdisciplinary Peshdar Plain Project was inaugurated in 2015 with the goal of investigating the region in the Neo-Assyrian period (9th to 7th century BC). It formed part of the Border March of the Palace Herald which served to negotiate relations with the adjoining client kingdoms in the Zagros, most importantly Mannea (south of Lake Urmiye), Ḫubuškia in the Sardasht Plain and Muṣaṣir in the Rowanduz Plain.
Work in 2015 focused on two closely connected sites in the small Bora Plain, a sub-unit of the Peshdar Plain: the tiny single-phase site Gird-i Bazar and impressive Qalat-i Dinka, looming on a rocky outcrop high over the river, both part of the Dinka settlement complex. This book presents the results of this first season of field work. Karen Radner offers an analysis of the historical geography of the region on the basis of the textual sources, including the private contract of 725 BC found at Qalat-i Dinka. Mark Altaweel and Anke March provide a geoarchaeological assessment of the Bora Plain while Jessica Giraud presents an evaluation of the Dinka settlement complex based on the results of the survey of the Mission archéologique française du Gouvernorat de Soulaimaniah (MAFGS). Jörg Fassbinder and Andrei Ašandulesei discuss the results of their geophysical survey at Gird-i Bazar and Qalat-i Dinka. The bulk of the volume is dedicated to the 2015 excavations at Gird-i Bazar, with contributions on the fieldwork by F. Janoscha Kreppner, Christoph Forster, Andrea Squitieri, John MacGinnis, Adam B. Stone and Peter V. Bartl. Tina Greenfield introduces the bioarchaeological sampling strategy. On the basis of the analysis of 666 diagnostic ceramic sherds from key find contexts and by drawing on parallels from the Assyrian heartland and western Iran, Jean-Jacques Herr presents a first assessment of the technical aspects, the fabrics and the shapes of the pottery excavated at Gird-i Bazar. Eleanor Barbanes Wilkinson, Andrea Squitieri and Zahra Hashemi present the small finds from the 2015 excavations.
In an appendix to the volume, Jörg Fassbinder presents the promising results of the 2014 magnetometer survey in Mujeser in the Soran district of the province of Erbil, the possible site of the capital of the kingdom of Muṣaṣir, a client state of the Assyrian Empire, and its famous Ḫaldi temple.
The research presented in this book throws light on a hitherto little known eastern frontier region of the Assyrian Empire. Gird-i Bazar is the first unequivocally Neo-Assyrian site to be excavated in the region. The occupation layers beginning to be uncovered there offer the rare opportunity to explore an Assyrian non-elite settlement. Its well stratified ceramic repertoire is of special importance as it allows us for the first time to synchronise the Western Iranian pottery cultures (with the key sites Hasanlu, Godin Tepe, Nush-i Jan and Baba Jan) with the Assyrian material of the 8th and 7th centuries BC.