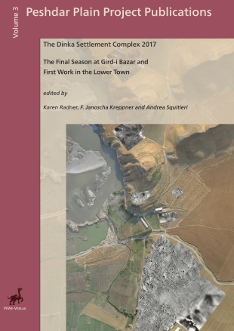 This report of the 2017 activities of the Peshdar Plain Project presents new data for the Dinka Settlement Complex and for the occupation of the Bora Plain on the upper reaches of the Lesser Zab near the modern district centre of Qaladze in the Neo-Assyrian and Sassanian periods, including a range of additional 14C dates derived from single year crops and human and animal remains.
Firstly, the volume details the third and final season at Gird-i Bazar, completing the excavation of all previously identified buildings and of two more pottery kilns. The star find is a pivoted stone that constitutes the upper-bearing for a potter’s wheel. As the three pottery kilns, this piece highlights the importance of pottery making at Gird-i Bazar. The surprise discovery of human remains in the filling of the private well of Building I produced the first Iron Age bodies unearthed at the Dinka Settlement Complex.
Secondly, the book reports on the first season of excavations in another area in the Lower Town, dubbed “Dinka Lower Town operation 2” (DLT2), where a test trench unearthed parts of three major structures: Buildings K (280 m2), L (800 m2) and M (650 m2), which can be demonstrated to all have been used during a common occupation phase. The pottery retrieved closely marches that known from Gird-i Bazar, and the volume includes a first typological assessment as well as data from the petrographic and residue analyses of the new pottery material. The so-called “Groovy Pottery” is now attested both in Gird-i Bazar and DLT2, and its local production can be demonstrated.
The DLT2 excavations also confirmed the accuracy of the results of the magnetometer survey in this area. The book presents the data of the 2017 continuation of this survey and offers a detailed interpretation of the lower town’s layout, its buildings and other features on the basis of the magnetogram. In addition, the book offers geographer Eileen Eckmeier’s assessment of the soils and sediments encountered in the Dinka Settlement Complex and the surrounding Bora Plain and considers their significance for landscape and site formation processes.
While the majority of the book will be of interest to anyone studying the Assyrian Empire and its eastern border region, the volume also presents new data for the occupation of the Bora Plain in the Sasanian period in the form of anthropologist Kathleen Downey’s discussion of the extensive Sasanian cemetery overlying the buildings of the Iron Age occupation of Gird-i Bazar.